» This is the second post in a 2 part series on fathering sons. To view Part 1, click here. «

The quest a boy must take in order to become a man is a treacherous journey. Every boy will face physical, emotional, and spiritual challenges. While there are plenty of external changes to observe, what happens on a heart level is much more important. How a father engages a boy’s heart directly affects who he will grow into as a man.

In our previous blog we discussed three of the five different stages a boy must pass through in order to become a man of heart. Today we'll take a look at the final two stages, The Wanderer and The Warrior, along with some crucial ways fathers can nurture a boy's heart and help him grow into wholeness as a man.

Which is a nice way of saying “adolescent”. This stage is called The Wanderer partly because they are wandering away from their parents. Boys this stage are making a shift away from parents and toward friends as the primary influence in their lives.

It takes a lot of ingenuity for a dad to stay engaged in this phase. One way to stay engaged is by supporting him in his pursuits—whether they are your interest or not. You may not be that into hunting and fishing, but now you spend your Saturday mornings sitting in a tree stand secretly hoping a deer doesn't walk into view.

You may have loathed the marching band in high school, and now you find yourself organizing bake sales for new band uniforms. Sports were your thing in school—now you are working the ticket booth at the school play. Get the idea?

Engaging your Wanderer by enthusiastically supporting his interests is great, but it can be a fine line. Dads need to be careful to not care more about any activity or interest in a son’s life than the son does himself. We all know the dad who’s identity is tied up in his son’s pursuits. Our interest needs to be with our sons, not their accomplishments and recognition.

As fathers, we need to understand not just how he’s wired, but what makes his heart come alive.

One thing we can hope for our sons in this time is a mentor to emerge and help guide them as they wander. Help him find trustworthy men (coaches, youth pastors, teachers) and encourage these relationships.

Since even the best relationship between dad and son can be strained during this stage, mentors can be help to guide our sons toward the last stage of development as a boy—the Warrior

If a dad has shown up and struggled well in the previous 4 stages then, being a dad gets a lot more fun in this stage. Relationship in this stage is more about quality than quantity. Boys in the Warrior stage are full of promise, purpose, innocence, and insight. They are trying to launch themselves into a dangerous world. He’s ready to fight but largely untested. This is where he begins to take his lumps.

As a father we can’t go to battle for him (though some us will try.) As dads, we need to make the transition to consultant and comrade. As he is trying to figure out what it means for him to be a man, our job as dads is to find ways to fit ourselves into his life. He still needs our presence in his life, but also the freedom to test himself.

If it sounds difficult, it’s because it still is. Parenting a son in transition is a lot like learning to line dance—there is a lot of stepping in and out. It’s all about timing.

Understanding doesn’t stop with development. A father also needs to have a awareness of his son’s temperament. A father must ask himself: how is my son uniquely wired?

Not all of a boy’s traits will be obvious from birth. It will take time—years—for him to show all that he is made of. But when he does show it, we as fathers need to understand not just how he’s wired, but what makes his heart come alive.

Engaging With and Validating A Boy's Heart

Without a man engaged in his story with him, a boy will get stuck left wondering if he has what it takes. Questions like this are at the heart of every man.

A mistake we make as fathers is not paying close attention to when and how our sons are asking questions. In each stage of his quest, a boy needs his father to engage differently.

The heart of a boys craves Rituals, Ceremonies, and Rights of Passages. In our rapidly changing culture, boys are wrestling with questions of identity, morality, and belonging. In a world that is rooted in relativism like never before, boys have little truth to which they can anchor their hearts.

Without initiation, boys are groping for direction. Initiation is fundamental to the heart of a boy.

Our culture has largely deemed it unnecessary to initiate young men. If fathers don’t create rights of passage for their boys, they will find their own. If we don’t mark their passage into the fellowship of man they will create experiences that make them feel like men.

Without initiation, boys are groping for direction. Initiation is fundamental to the heart of a boy. It introduces them to manhood. A boy who has been initiated is connected to something bigger than himself and he grows up knowing that life has meaning. For initiation to be valuable it must be costly.

For a boy who has been tested by the furnace of life and made it through, life seems different. He finds himself connected to something greater than himself. In the process of initiation the shell of his boyhood dies and what emerges is the heart of a man connected to God. Initiation, at its core, is both painful and spiritual. It’s more about revealing God's character than is about revealing the boy’s character.

Along with Initiation comes Celebration. Boys need to be celebrated. And considering this kind of experience for a boy, here's one thing to keep in mind: make certain to keep your son’s interest at the center of the celebration. You don't want to put so much emphasis on a theme for the event itself that you miss who he is and what he loves. Make sure the nature of the celebration matches the nature of the boy.

This framework of Understanding, Engaging and Validating, Initiating, and Celebrating can help us. Being a father is hard, costly, and rewarding work. A father can’t give what he doesn’t have.

While a mother’s challenge in parenting her son is his “otherness,” a fathers challenge is his son’s “sameness.” Son’s have the power to expose the chinks in a father’s masculinity—forcing me to face myself. Through a son, a dad reconnects with his own experience of being a boy (and a son himself).

In order for a father to encourage his son toward a heroic journey through boyhood, a dad must first be present to his own life. That is not a one time thing. Too many men think they’ve done all their manhood work. They’ve gone to the retreat, read the book, watched the video, memorized the slogan, and gotten the t-shirt. Becoming a man after God’s own heart is an ongoing process not a series of events. If a father doesn’t keep showing up in his own life, he can’t show up with his son.

For a dad to do this well, he must unpack the bags of his own childhood. To the degree a dad hasn’t answered the questions of his own story, he will be tempted to put that burden on his son’s shoulders. There are too many men who’ve needed their sons to be something other than themselves to somehow reduce or heal their father’s fragile ego.

A father has to engage his own heart and his own story. Dad’s must come to terms with the truth of who they are as men—the good, the bad and the ugly—and how these things play themselves out in the life of their son.

No matter how you slice it, a father’s relationship with his son goes a long way toward defining a boy’s masculinity and shaping our world. There is no weightier title a man can bear than father—not CEO, not coach, not president, not husband. As fathers, we have in us the power to bless and the power to curse.

Our sons need us to live fully with our hearts surrendered to God and His story for our lives, so that we can help them live the story He has written for them.

Stephen James is the Executive Director of Sage Hill Counseling and the best-selling author of five books, including Wild Things: The Art of Nurturing Boys. He earned his master’s in Counseling from The Seattle School of Theology and Psychology. Stephen is a contributor to 33 The Series, Volume 6: A Man and His Fatherhood. He and his wife live in Nashville, TN and have four children together. You can follow Stephen on Twitter @stephenbjames. 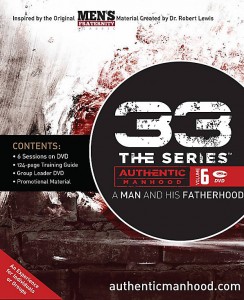 Preview the Video and Training Guide for Session 1 of A Man and His Fatherhood.

BONUS VIDEO: View the trailer for A Man and His Fatherhood