Please note we are experiencing order delays due to inclement weather.

Our neighbors picked me up from school that day - a day that would become a defining moment for me just a few weeks after my tenth birthday. Our house was packed with an odd mix of relatives and neighbors. My mom guided me through the crowd and into my room. With courage and compassion she did her best to explain that my dad had been in an accident. He would not be coming home. He was gone.

I remember the tears, but what was I crying about? My father had never really been a dad to me. In my short life, he had been virtually invisible. I didn't really know what a dad was; I just knew that I didn't have one anymore. Years later, I learned how my mom had shielded me from his excessive drinking and his abusive tendencies. I guess it was a good thing that he was distant and disconnected from me.

There is a word I use to describe an experience that is just so-so. Unremarkable. That was my dad. My experience with him was not unpleasant. It was just unremarkable. I honestly cannot remember the sound of his voice. At best, he is just a blur.

I only have one family photo with my dad in it. We're at my sister's wedding. It looks as if he's been attached to the group - an awkward fit. We could Photoshop him out without having to change any of the details of that event. His presence there and at other events was inconsequential. Unremarkable.

There must be a time, however, when a man draws a line that defines what was then and what is now.

I didn't fully appreciate it at the time, but looking back over the years, I could see the strength God gave my mom to raise a headstrong son like me. She prayed hard that God would cross my path with men who would fill the void left by my dad and show me what it meant to be a man.

Like most young men who grow up without a father, I guessed about a lot of things. For example, I guessed in my relationships with girls and in the way I managed my money. I grappled with manhood and what life is about. Most of the time I guessed wrong and just gave in to the culture.

It's easy to take shots at a dad who was disengaged, and it's convenient to use the void left by his death as an excuse for irresponsibility. There must be a time, however, when a man draws a line that defines what was then and what is now. There must be a defining moment when he decides, regardless of what he has or hasn't been given, that he is going to reject the natural passivity he was born with and the cultural passivity he has been conditioned with. There must be a time when he accepts responsibility and makes a decision to lead courageously, or at best he will only be a blur. Not necessarily a bad husband or father, just unremarkable. 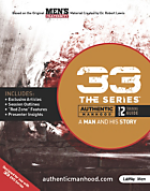 This article is an excerpt from 33 The Series Volume 2: A Man and His Story.

View Session 1 of A Man and His Story.

BONUS VIDEO: View the trailer for A Man and His Story