“The Lord Himself goes before you and will be with you; he will never leave you nor forsake you. Do not be afraid; do not be discouraged.” – Deuteronomy 31:8

I was going on tour with my band, The Afters, to Amsterdam, Holland. My family is from The Netherlands and it was a place that I had always dreamt of doing music. This trip however, was clouded in sadness. One of my closest friends, our long time sound-man, Anthony Martinez and his wife Lauren had just lost their daughter, Pieper at birth. It was completely unexpected and left Anthony and Lauren completely numbed with pain. We asked them both to come on the tour in hopes of being able to shower them with love and support. While we were sound-checking, our wives were walking through the city. They came back excited to have found the perfect place to go for a post-show dinner: A cafe called Pieper. It was the only time they had ever seen another use of the spelling that they had chosen for their daughter’s name.

After the show we all went to the cafe. We shared some words of support and remembered sweet Pieper. As we got up to leave, we noticed that the only thing on any of the walls was a framed document, an award given to the Pieper Cafe for hospitality. The date on the award - the only date visible in the entire cafe - was the same date as baby Pieper’s birthday. We were all in disbelief. Pieper’s name and birthdate on a wall, in a cafe, all the way on the other side of the world! We thought, ‘This is where God’s angels fly: right in the middle of our loss. God gives us little glimpses to show us that he’s here, even in the midst of our pain’.

When I think about the things that have challenged my faith the most, the dark nights of my life... seeing some of my closest friends lose their child at birth, losing my father to cancer at a young age, being in the NICU with my newborn son and not knowing if he would make it through another night, the loss of a friend who died way to young in a horrific car crash...these are also the very things that have strengthened my faith the most. In the midst of tragedy, I’ve experienced God’s presence. In the midst of loss, I’ve experienced God’s comfort and seen that God truly is with us in every moment of life. Deuteronomy 31:8 reminds us of God’s faithfulness. God is with us when we’re standing on top of the mountains in life. He with us in our joy and happiness! But He is also with us when we walk through the valleys in life. He’s with us through the nights that seem endless.

We will all experience pain in this life. Those things can either pull us away and distance us from God, or ultimately draw us closer to God. When you find yourself in the midst of a dark night, remember that you are not alone. The God that made you, is with you, loves you, and will never leave you. 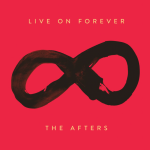 Josh Havens is the front-man for Texas-based, four-piece band The Afters, who were propelled into the national spotlight with their debut album, I Wish We All Could Win. The project spawned the swirling, melodic hit “Beautiful Love", which was the most downloaded track of 2006 on the iTunes ® Inspirational charts and garnered the band an mtvU award. The Afters’ sophomore release, Never Going Back To OK, debuted in the Top 50 on the Billboard Top 200. The band’s third record Light Up the Sky bolstered two No. 1 radio hits, as well as placements on “The Biggest Loser” and “You Deserve It”.

BONUS VIDEO: Watch Live On Forever from The Afters