Bob was a middle-aged man who lived alone in a small town in Kentucky. His father had died years earlier and left him a barn full of stuff he had collected over the years. In the middle of the rickety barn was an old, dust-covered car that hadn't been started in years.

One morning an elderly man named Barney stopped by to inquire about the car. He told Bob he was the original owner and shared the story of having to sell it due to financial hardships. As the old man continued to recount how long it took to save the money and the memories made in it, Bob asked him if he would want to buy it since he had no need for it or children to pass it down to. Without hesitation, the man told him to name his price. With no real knowledge of what the car was worth, Bob asked him if he thought five hundred dollars was a fair price. Knowing the real value, the old man offered him thousands higher. However, Bob stuck with original price, handshakes were made, and the deal was done.

Several months later while in town, Bob saw Barney driving an electric blue, 1970 Dodge Dart Swinger with a bumblebee stripe and dual-hood scoops. He couldn't believe this was the same car that sat in the old, rickety barn! With utter excitement, Barney told him about the whole restoration process including how expensive it was to restore it back to its original state (see pic below).

Restoring anything to its original state is an expensive and lengthy process. The secret is to find someone who understands the true value and is willing to pay the price in time and money.

The great news is that Jesus saw our dust-covered, dilapidated condition and willingly paid the ultimate price for the opportunity to restore us back to our original condition.

From a spiritual angle, at some point we were or are currently the old car in the barn. The great news is that Jesus saw our dust-covered, dilapidated condition and willingly paid the ultimate price for the opportunity to restore us back to our original condition. Hence the journey we're on. Being restored back to the image of a great, mighty and loving God. This means we can be great, strong, courageous, mighty, and loving too!

Our part is to “give in” to the process of a manhood overhaul. Allow the original Creator to grind, cut away, and smooth out the areas in our lives that are imperfect from years of abuse, neglect, or are just worn out. This is how the restoration of our manhood takes place.

Here's what the '70 Dodge Dart Swinger shown above looked like before Barney's restoration. 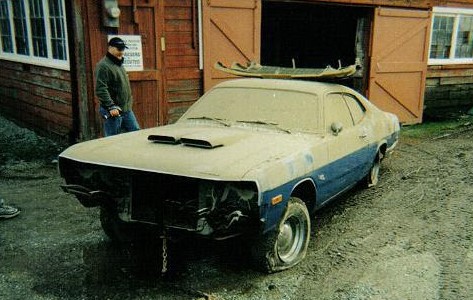 JT McCraw is the men’s pastor at Bethel World Outreach in Brentwood, TN and the founder of the BE MEN Movement, where he provides oversight for this multi-ethnic, multi-site men’s ministry, focusing on engaging and equipping men to serve Christ. Presently they have locations in Tennessee, Texas, Florida, Ohio, Louisiana, Alabama and Arizona. JT lives in Franklin, TN with his wife of twenty-four years and their five children. You can follow JT on Twitter @jtmccraw.