The makeshift welding station was strategically positioned at the top of the driveway. Each man passed by it as he arrived. For six Tuesday nights these five young men, all of them in their twenties, gathered on this patio in their journey toward authentic manhood—a journey that began between a father and son, now extended through a son to his buddies.

Dave Marks first heard the principles of authentic manhood with hundreds of other men. Dave and a small group of other dads understood the advantage a young man would have if he learned these principles early in life to provide a clear framework for manhood. They designed an experience for their sons, teenagers at the time, to acquire what they had discovered. Dave is a pretty creative guy so this father-son experience was filled not only with great content but also with an interactive junkyard visit, homemade rocket launchers, a huge ceremonial bonfire and other “meaningful” pyrotechnics!

Taylor Marks, now twenty-three, and his dad saw the value in revisiting these principles at strategic times in their lives. The time was right for them to do A Man and His Design from 33 The Series together—just a father and his son. The Manhood Definition and the Four Faces of Manhood were now richer, deeper and more meaningful for both of them. Taylor’s first thought was to accept responsibility, enlist a group of his buddies and lead them in this manhood journey together.

Good things happen in an environment of honesty and trust. A healthy level of vulnerability emerges where you can freely express the feelings of your heart, your struggles, your failures and fears. There is safety, camaraderie and genuine community. No one passes judgment on another, but at the same time no one diminishes the truth. This is the brotherhood of real men.

Alex, Stephen, Chase, Grant and Taylor. They all decided to meet for a seventh Tuesday night to share their Action Plans and to seal the covenant they would make to each other. But one of the guys was missing. As it turned out he was in bed with a migraine but this night was too important to proceed without him, so they jumped in their cars and dragged him there. My guess is that with this group of guys you have no excuse unless you’re dead or dying!

The conversation on the patio flowed freely. One of the realities that resonated with all of these young men was the phenomenon of so many guys in their twenties who are stuck in extended adolescence. They saw too much of it in their friends and felt too much of it in themselves. Another common thread was the need to reject passivity and to step up and lead courageously—to lean in to the King and the Warrior Faces of Manhood. One of them expressed his desire to have a more developed Friend Face and to connect with others on a more substantive level. Living with a transcendent cause and investing eternally—these are the things real men discuss.

After that we gathered at the top of the driveway around a two-feet by two-feet steel plate. Looking back on that night we realized the symbolism in many of the elements.

The steel plate was actually a boilerplate. A lot of guys never open their chest up to another man. We tend to stuff our unresolved issues and settle for superficial “How’s it going/I’m fine” drive-bys. We’re like a pressure cooker—a boiler—that leaks and causes all kinds of damage to our self and collateral damage to others. Real men learn how to rip that plate off and deal responsibly with what is inside.

Living with a transcendent cause and investing eternally—these are the things real men discuss.

Our steel boilerplate was lying across a large scrap piece of lumber on top of a wheelbarrow. The lumber was leftover oak from their church that was built thirteen years ago. The Four Faces of Manhood—King, Warrior, Lover, and Friend—were welded on the four edges of the plate. Each of the five men welded their initials into the plate. They were making a twenty-year covenant with each other, to stick together no matter what and to hold each other accountable in their journey toward authentic manhood. The welding heated up the plate, which in turn heated up the wood filling the air with a pleasing aroma of oak, metal, and smoke.

Someone suggested that the steel plate would rust as the years rolled by. We immediately felt that metaphor of life and the strength of this brotherhood that surrounded it. One of the guys had the idea to weld “33” in the middle of the plate because Jesus is our model of authentic manhood in the 33 years he lived on Earth. These men agreed that their covenant with each other would not exclude others from joining them in their journey. This was the core that would include others along the way.

I had been invited to deliver a personal challenge to these men. I reminded them of the Laws of the Harvest. The first law is you reap what you sow, so you need to choose your seeds wisely. The second law is that you reap in a different season than you sow, so be patient. There is no such thing as microwave manhood. It is a process, a journey. The third law is that you always reap more than you sow. Good, bad or ugly, your harvest is only as good as the seeds you sow.

We talked about transitioning well through the seasons of a man’s life, focusing on where you are now while anticipating where you are going, always living with the end in mind. Taylor’s dad pointed out that over the next twenty years these guys would gather at each other’s weddings. They would gather at the births of their children and eventually the funerals of their parents. This was the reality of the covenant they were making.

I couldn’t help but think that here I am in my fifties nearing the end of this fall season of my life. There they are in their twenties just hitting their stride in the spring season of life. Our common purpose transcended our seasons just the way it should be. We are connected. These men are my brothers.

One of my favorite parts of 33 The Series: A Man and His Design is the spoken word piece that Tedashii wrote and performed specifically for us. I capped off the evening with this excerpt:

What was he thinking? Where was the plan?

And I refuse to let the kid in me look down at that future grown man. 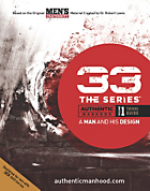 This article references 33 The Series Volume 1: A Man and His Design.

View Session 1 of A Man and His Design.

BONUS VIDEO: View the trailer for A Man and His Design