A cigar shop is not the first place you might look to join a men’s bible study community. However, one Little Rock cigar store owner is offering exactly that.

Just over a year ago, 32-year-old Brandon McKinney left his career as a detective for the Fort Smith police department to come to Little Rock and open a cigar shop. Growing up in Fort Smith, Brandon always enjoyed hanging out at the local cigar shop, where he felt a sense of community and grew to love cigars. But he had a dream to create a cigar shop that would provide more than cigars, it would also provide a place for men to honestly and openly connect with other men and actually encourage one another to be better men.

Shortly after Brandon opened West End Cigars, he attended a study for men at Fellowship Bible Church, called 33 The Series. It is not really a Bible study, but a manhood video study that uses the 33 years that Jesus lived on Earth as the model for authentic manhood. Brandon related not only to the content of the study but also to it’s non-churchy, high energy presentation. Brandon knew immediately that his cigar shop was the perfect venue for a weekly manhood study where men could watch the video and then huddle up in groups to discuss what they’d heard and how each one could do better as a man.

Since last spring, Brandon has facilitated four of the six volumes of this Authentic Manhood Series. Brandon was surprised to see 31 men show up for the first volume of 33 The Series. By the 6th and final 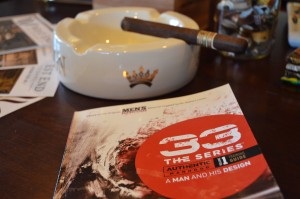 week of the study, his cigar night had grown to 46 men. Brandon says, “33 The Series is not really a Bible study, it’s more of a manhood study that helps men apply Biblical truth to real life. Guys not only love the practical content of this video study, but they really enjoy breaking into small groups to process the material together. This is an environment where guys can openly talk about their challenges and struggles with other men of all backgrounds, ages, and ethnicities. My dream of having a shop where men could feel a real sense of community and encouragement has been more than realized. I am so pumped about what is going on here.” The folks at Authentic Manhood are enthusiastic and honored about these resources being used in thousands of churches globally to impact men. It's also super exciting that some men are taking 33 The Series outside the walls to guys who aren’t yet connected to a church.

Since Brandon began this series, many men have joined in because of a genuine interest in the subject matter, others out of curiosity, and a few who just stuck around to have one more cigar after closing. Whatever the reason, Brandon is thrilled by the response. One thing’s for sure, Brandon may have the only cigar store in the world where wives are kicking their husbands out of the house to go smoke a cigar with their buddies.