Some movies are entertaining, some are educational, and then there are those that make you feel something. A mentor once told me, "Pay attention to what moves you. It's either God inviting you deeper into the Larger Story or deeper into your own story." Those words have stayed with me and as I find myself experiencing deep emotions during a movie, I try to pause and reflect on what about that particular scene is hitting me so hard.

Marlin (Albert Brooks), a clown fish, is overly cautious with his son, Nemo (Alexander Gould), who has a foreshortened fin. When Nemo swims too close to the surface to prove himself, he is caught by a diver, and horrified Marlin must set out to find him. A blue reef fish named Dory (Ellen DeGeneres)—who has a really short memory—joins Marlin and complicates the encounters with sharks, jellyfish, and a host of ocean dangers. Meanwhile, Nemo plots his escape from a dentist's fish tank.

A movie to watch with the entire family. Finding Nemo is a beautiful example of the lengths a father will go to bring his son back home. There are no obstacles, no adversaries, and no limitations to what Marlin will do to be reunited with his son. This animated feature not only has some great humorous moments, but it also provides a deeply touching finale. If you haven't seen it in awhile, this is a great weekend to watch again with your kids, however old they might be.

A shy adolescent boy, Walter (Haley Joel Osment), is taken by his greedy mother (Kyra Sedgwick) to spend the summer with his two hard-boiled great-uncles, Hub (Robert Duvall) and Garth (Michael Caine), who are rumored to possess a great fortune. At first, the two old men, both set in their ways, find Walter's presence a nuisance, but they eventually warm up to the boy and regale him with tall tales from their past. In return, Walter helps reawaken their youthful spirit.

For some, a surrogate father is necessary. When a child doesn't have their natural father present, emotionally or physically, a father-figure is needed to fill the space. This film powerfully illustrates the impact of two uncles, who became like a father to Walter. They provided initiation and rites of passage to Walter and, through the retelling of Hub's story, modeled what it was like to be a man. To pursue and protect. To love and sacrifice. A terrific movie for sons and fathers/mentors/father figures to watch together.

Sheriff's deputy Adam Mitchell (Alex Kendrick) endures a terrible personal tragedy that causes him to question what is really important to him. Taking comfort in his faith, Adam vows to become a better parent to his teenage son (Rusty Martin), and convinces his friends on the force to sign a pledge that they will all strive to become better Christians and better parents. Unfortunately, one of the men's moral compass appears to be broken when it comes to earning some fast money.

This film is even better to watch with your friends who are also fathers. There's not many roles that have higher stakes than that of a father. Our kids are facing so much more than we ever did when we were young and they need us more than ever to be intentional fathers. You'll be encouraged to be the very best dad you can and also find some tools that will help you in that journey.

After Amy (Anna Paquin) loses her mother in a car accident, she must uproot her life and move to Canada to live with her father, Thomas, (Jeff Daniels), an oddball inventor with whom she has no relationship. She initially struggles to find her her place in her new home, but things change when she stumbles upon a collection of abandoned goose eggs. When the eggs hatch, Amy and her dad work together teaching the motherless birds to fly south for the winter, and their relationship blooms.

What makes this movie special is it helps us find hope when we feel like we've blown it as a father. No matter how you've missed the mark with your kids, it's never too late to connect with them. Regardless of how they act on the outside, inwardly every child longs to have a meaningful relationship with their dad. One way to engage with your children is to enter into the world of your child's imagination and join them there. Look for the little things that capture your children's attention and show interest in it too.

It seems that Bob Jones (Michael Keaton) has everything a man could want, namely a fulfilling job and a beautiful, pregnant wife, Gail (Nicole Kidman). But Bob's life is turned upside-down when he is diagnosed with cancer and given four months to live—not even enough time to see his first child's birth. To cleanse himself of demons in his remaining days, Bob makes a video diary, hoping to pass along some wisdom to his future child. Along the way, he discovers a lot about himself.

One of my all-time favorites movies. There isn't a more compelling story that dramatically expresses the depth of love a father has for his child than My Life. Disclaimer, this movie might just wreck you. If you don't often get a little teary during movies, you might not be prepared for this one. Better suited to view with adult children, this isn't one to feature on a movie night with younger kids. But man, you'll be moved deeply on this one. You'll want give your family a giant bear hug and remind them of how completely loved they are.

Some of my honorable mentions include: The Pursuit of Happyness, Return of the Jedi, and The Astronaut Farmer. So, what are some you would include on this list? 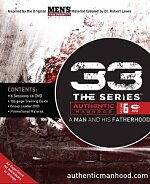 View the Video and Training Guide for Session 1 of A Man and His Fatherhood.

View the trailer for A Man and His Fatherhood